Back in anceint times a.k.a. the eighties, when I was 19 years old, I began working as a sales clerk for So-Fro Fabrics.  During the following 3 years, I transferred to a different store location, was promoted to Second Assistant Manager (for a whopping 50-cents more per hour - lol), met and worked with great people who possessed vast sewing knowledge and experience and was willing to share, and accumulated a pretty impressive collection of sewing patterns.  I look back on my time there with a great deal of fondness and nostalgia.  And while So-Fro Fabrics is no more - being officially bought-out by JoAnn's in the late 1990s - I still have that impressive pattern collection.

As other sewing enthusiasts know, the major pattern companies discontinue patterns to make room for new designs they're releasing.  Now that these companies sell patterns via their respective Internet sites, you are still able to purchase an "Out of Print" pattern directly from the manufacturer.  But, back in the day, you were only able to purchase patterns from an authorized retailer.  So, once that store's staff pulled those discontinued patterns from their cabinets and destroyed them, it was a done deal.  That pattern was gone forever...at least in theory.


One of the fringe benefits of working for So-Fro was they allowed us to scan through and keep those discontinued patterns prior to their destruction.  This was, without a doubt, my favorite time in the store.  I recall how excited I'd become when I'd get to work and one of my co-workers would announce "We have discards!!"  It was like going shopping for free.  So, as a result, I brought home LOTS of patterns during my tenure there.  So much so, that I purged approximately 100 or so about 4 or 5 years ago and donated them to charity.  I could kick myself now, seeing how popular "vintage" patterns are on the web, but what's done is done.

Owning so many patterns posses a storage challenge, and I've tried various methods over the past 20+ years:

While my current solution addresses the dust and light issue, I noticed these covered boxes are not as deep as my converted Clorox boxes, and therefore cannot accommodate the same quantity.  Plus, I'm not all that thrilled with the box's "decoration" - it's not really my color or style.  So, I'm still thinking about other, possibly better storage options.  But, it's working for now. 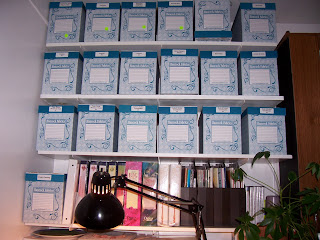 What storage solutions have you adopted?﻿

Posted by Aisha Johnson - SewCouture at 9:12 AM